Jesus Transcends Them All 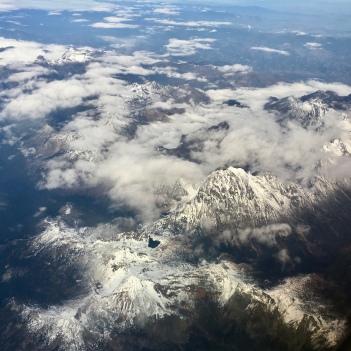 The Book of Hebrews, one of the most ignored New Testament books, powerfully argues that Jesus is the final destination and the retirement place of every religion, including yours and mine. All attempts to find God through the ways of religion are exhausted in Jesus. The One who “is the end of the law” (Romans 10:4.) has become also the end of any and every religion.

The book progressively demonstrates that the entire Old Testament’s religious narrative, with its beliefs, practices and institutions served only one purpose – to guide human history, and its communities and peoples to Jesus Christ. The Old Testament religion, with its prophetic mission, laws, tabernacle, priestly duties, sacrifices and festivals, observances and rituals – was only a shadow destined to vanish once the real deal was revealed, thus making Jesus Christ superior to every detail of the Old Testament religious decorum.

No element of the Old Covenant religion is left untouched. Finally, only Jesus remains, seated at the right hand of the Father, as the ultimate authority, and exclusive object and focus of our adoration. It is within such context that the author is calling his followers to be purified from the dead works of religion, and serve the real and living God, and not an ideological concept, idol or a mascot (Hebrews 9:14.).

The New Testament message supports the picture of a temporary and limited use of religion. It speaks of the Old Covenant as something that is fading away, disappearing and becoming obsolete in Jesus. It is “a veil taken away whenever anyone turns to the Lord”, and a “guardian put in charge to lead us to Christ” (2. Corinthians 3:7-18., Hebrews 8:13, Galatians 3:24.). The implication is that Jesus Christ is everything and much more any religion can offer.

With His life, death and resurrection Jesus Christ did not upgrade the old religion. He was not a “new patch placed on the old garment”, or “a new wine poured into old wineskins” (Mark 2:21.22.). Nowhere did He suggest that he was a founder of a new religion either. The four Gospels and the rest of the New Testament are uncomfortably quiet about Jesus leaving behind any instruction to his followers as to how to turn his legacy into a religious system. Instead he called people to follow and trust Him, suggesting that out of his following a worshiping, caring, loving and serving community would emerge; a community made of people who, having been embraced by Jesus first, are now embracing each other in love. Thus, His community would become the light and the salt to the world (Matthew 5:13-16.). The New Testament calls it His Church and His body, and defines it relationally rather than institutionally.

I suspect that not much of what most of us perceive as Christian religion today was ever intended by Jesus or his immediate followers. I fear that much of our colorful religious heritage, spiritual folklore, even some cherished teachings and beliefs are nothing more than ancient or more recent collections of superstition that are continuously pushing us back into the shadow-land of religion outgrown in Jesus?

Here is the punch line. The Old Testament religion, with all its religious décor, had only one legitimate purpose – to surrender people, communities and history to Jesus Christ. This is no less true for any other religion. They are only as useful as they are eventually willing to capitulate to the One who transcends them all. And Jesus’ intention was never to return his followers back to the ways of religion, but to keep them in his loving embrace.

Richard C. Halverson (1916-1995), a former Chaplain of the US Senate, summarizes it all well: “Jesus Christ transcends all religions! Judaism, Islam, Buddhism, Hinduism. He is greater than all these, including Christianity. Religions are the inventions of men. They may begin with a great leader in mind, but human tradition soon reduces the original to a mere set of ethical standards and a dead letter of the law which no one can follow. Jesus transcends religion because He is the incarnation of all that is true, good, loving, gentle, tender, thoughtful, caring, courteous and selfless.”

The message of Jesus’ supremacy over religion, any religion, demonstrated so well throughout the Book of Hebrews, was also powerfully illustrated in the event of Jesus’ transfiguration.

One day Jesus took three of his disciples – Peter, James and John – to a solitary mountain for a special educational moment. There the three disciples had a unique encounter not only with Jesus, but also with Moses and Elijah, two pillars of the Old Testament religion. Delighted and afraid disciples wanted to turn the mountain into a holy shrine. The moment Peter suggested the idea to Jesus, everything changed. “A bright cloud covered” the terrified disciples. They fell to the ground and heard the voice speaking from the cloud: “This is my Son with whom I am well pleased. Listen to him!”   A moment later they looked up and “they saw no one else but Jesus.” Matthew 17:1-8. In other words, no one and nothing else mattered any more but Jesus.

Tihomir Kukolja, born in Slavonska Pozega, Croatia in 1954. Studied, lived and worked in Yugoslavia, Croatia, United Kingdom, Australia and the US. Education in theology, communications, and radio journalism. Worked as a church pastor, media professional, radio producer and presenter, journalist, religious liberty activist, and reconciliation and leadership development activist. Lives in Baytown TX, USA with professional ties with Seattle WA, USA and Fuzine, Croatia. Currently serves as the Executive Director, Forum for Leadership and Reconciliation (Forum), and Director of Renewing Our Minds (ROM) initiative. Loves photography, blogging and social media. Views, opinions and interests expressed in this blog are those of the author and contributors alone, and do not necessarily represent the views of organizations with which the author is or has been associated in the past.
View all posts by Tihomir Kukolja →
This entry was posted in Faith, Reflection, Religion and tagged Bible Study, Faith, Hebrews. Bookmark the permalink.

1 Response to Jesus Transcends Them All